The ROMAR® Swarf Handling System has been developed in-house by our own engineering staff and incorporates the cumulative knowledge, experience and operational expertise amassed over several years as a specialist provider of magnetic separation technologies to the oil and gas industry. The system has been designed with efficient metal particle separation and manual handling safety as the main considerations in order to provide a safe, highly efficient solution for the processing of liquids or slurries contaminated with metallic particles. The ROMAR® Swarf Handling System involves a three stage swarf separation and recovery process, two of which involve the use of ROMAR®  patented magnetic separation technology to ensure the effective removal of metallic contaminants from the drill fluid. Our systems are capable of operating at flow rates of up to 1,500gpm while recovering debris at up to 2,000 Kg/hr. We will not limit milling performance, allowing the full optimisation of milling parameters. Thus saving our clients rig days and considerable expense.

Larger particles of metallic and non-metallic waste are removed as the drilling fluid passes through the optional ‘scalping’ unit attachment prior to entering the flow trench of the Magnoveyor® unit. The scalping unit directs the well fluid through a coarse ‘grill’ located within an acutely angled section of large bore pipe at the top of the unit. The sudden change in well flow direction at the acute angle, accompanied by the physical interference of the metal grill causes the larger particles of waste (non-metallic as well as metallic) to fall out of suspension and drop down to a collection chute prior to the drilling fluid being passed through to the Magnoveyor® unit for further processing.

After passing through the Magnoveyer® processing stage the drilling fluid is subjected to a final ‘polish’ as it passes through an EZ-Clean grid of high strength ditch magnets in order to ensure the complete removal of  metallic swarf fragments prior to the mud being passed through to the rig shaker system. The ‘EZ-Clean Magnorod® system is a high strength magnetic separation system comprising an array of magnetic rods that sit vertically within a frame which is positioned across the flowline.  The magnetic rods within each frame form an interconnecting and uninterrupted magnetic field across the entire flow area of the fluid path, thereby creating a highly effective metal particle separation system. 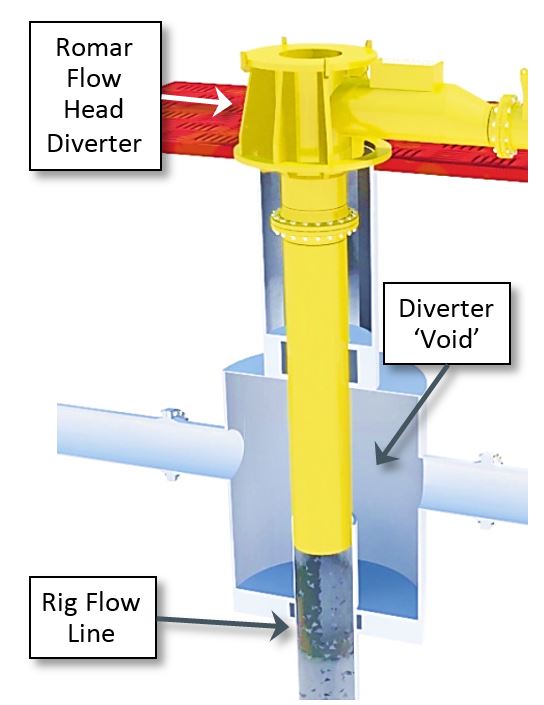 A key element in maximizing the performance of any swarf handling system is ensuring metallic particles remain in suspension up to the point that they enter the separation process. This rather obvious statement of fact highlights one of the key performance differentiators of the ROMAR® Swarf Handling System. Immediately prior to its arrival at surface, the drilling fluid is channelled through the rig’s diverter system and as the available flow area increases the well fluid velocity decreases causing heavier particles to fall out of suspension, leading to the accumulation of debris in the void immediately below the drill floor. ROMAR® patented Flow Head Diverter™ system addresses this problem by ensuring that a continuous, uniform conduit to surface is established and fluid flow velocities are maintained whilst the drill fluid is directed towards the separation processing equipment on surface.